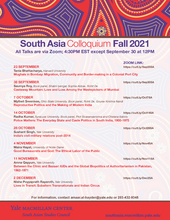 The turn of the twentieth century was a period of transition for Bombay, with older ideas about itinerancy, place, and belonging jostling for space with new colonial legislations that sought to police migration, separate land from the sea, and reify previously porous borders. On the one hand, there were itinerants following in a long Persianate tradition of travel, work, and habitation between cities in Iran and Hindustan, dependent on customs and networks of hospitality and charity. On the other hand was a colonial state anxious to control urban crime and the rapidly swelling traffic of people in and out of Bombay by laying down laws that linked itinerancy with crime and belonging with the ownership of property. The struggle of itinerants to survive the tightening noose of colonial legislation and continue their lifestyles between places shaped the making of “Mughals” and “Iranis” as subjects and communities in colonial Bombay.