The Art of the Borderland across South and Southeast Asia: a public conversation with Parismita Singh 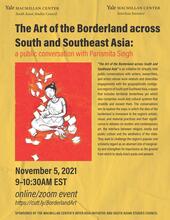 Abstract: “The Art of the Borderland across South and Southeast Asia” is an initiative for virtually held public conversations with writers, researchers, and artists whose work extends and diversifies engagements with the geographically contiguous regions of South and Southeast Asia, a space that includes territorial borderlines yet which also comprises social and cultural systems that straddle and exceed them. The conversations aim to explore the ways in which the idea of the borderland is immanent to the region’s artistic, visual, and material practices and their significance to debates on modern and contemporary art, the interface between religion, media, and public culture, and the aesthetics of the state. They seek to challenge the region’s popular and scholarly regard as an aberrant site of marginality and strengthen its importance as the ground from which to study Asia’s pasts and present.
The first public conversation of this initiative is with the artist and writer Parismita Singh. Singh’s extensive body of work focuses on art, culture, politics, and fashion in northeast India, a culturally, and linguistically diverse part of the country that comprises eight regional states and where the Indian state has historically exercised exceptional forms of governance. Singh’s work crosses many boundaries across narrative and visual forms to address the lived social and political realities of the borderlands of northeast India. The conversation will focus on the richly layered aesthetic form the artist and writer draw on to tell complex stories about the region, such as a series of graphic stories for Huffington Post (India) on the plight of people rendered stateless by the National Register of Citizens (NRC), compiled by the state government of Assam in 2019.
Speaker: Parismita Singh is a writer and artist whose publications include the graphic novels The Hotel at the End of the World (2009) and Mara and the Clay Cows( 2015); a collection of short stories Peace has Come (2018) and Centrepiece: New Writing and Art from Northeast India ( edited). She has also worked on the ‘NRC Sketchbook’ a graphic reportage series for Huffington Post (India). She writes an illustrated column on the confluence of art, culture, and fashion, with a particular focus on Northeast India for the Voice of Fashion.
In conversation with: Akshaya Tankha is an art historian of modern and contemporary South Asia and the Postdoctoral Associate and Lecturer at the South Asian Studies Council at Yale University. Tankha’s current book project examines the boundary work that objects perform across ritual and secular domains of practice, the contestations this process engenders, and what that tells us about the significance of art and the political significance of the aesthetic in the Indigenously-inhabited state of Nagaland in northeast India.