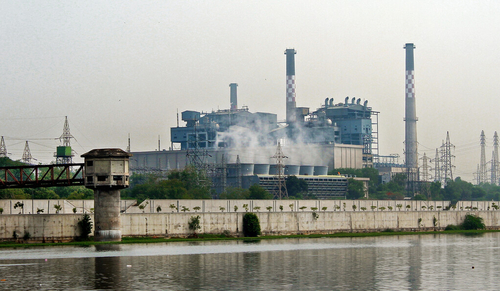 Indian states are deploying a new policy tool that shows potential to reduce their high air-pollution levels, which are estimated to have caused nearly 1.7 million deaths, or 18% of all Indian deaths, in 2019.

The policy tool — an emissions trading system (ETS) known as “cap-and-trade” — has successfully curbed emissions of carbon and sulphur dioxide in Europe and the United States. However, it has rarely been used in lower-income countries, which often lack the necessary data infrastructure. And until recently, it had never been used for curbing particulate matter — the soot and other industrial emissions that pose urgent health concerns in many highly polluted developing economies.

Rohini Pande and Nicholas Ryan, Yale economists affiliated with the university’s Economic Growth Center, are part of a team of researchers who have collaborated with policymakers in the state of Gujarat to test the world’s first pilot ETS for particulate matter. We spoke with Pande and Ryan about their preliminary results, which are so promising that another state, Punjab, launched its own pilot program on June 5.

How does an Emissions Trading System work?

Nicholas Ryan: It works firstly by capping emissions in a given area for a given pollutant, and secondly by allowing the sources of that pollutant, typically factories, to trade among themselves to achieve the lowest possible cost of compliance. Both elements are vital — the cap provides environmental assurance that the emission target will be achieved, and that’s one reason why environmentalists might prefer cap-and-trade systems to other instruments like taxes. And the allowance for trade means that abatement (i.e. reductions in pollution) will be done by the plants that can do them more cheaply, lowering the cost for everybody.

The most prominent early landmark ETS was for sulphur dioxide from power plants in the United States in the U.S. Acid Rain Program. That was an incredible success. It more or less ended acid rain as a problem, which had plagued the northeastern United States, by dramatically reducing sulfur dioxide emissions and therefore ambient particulate pollution. After that program, it’s been applied much more widely and prominently to carbon dioxide, for example in the European Union’s ETS Program or California’s AB-32 Program for trading the right to emit carbon.

The launch of the Punjab ETS for particulates on June 5 followed on positive results from Gujarat. Can you tell me about the Gujarat program?

Rohini Pande: A group of us, including our colleagues from the Energy Policy Institute at University of Chicago and the Jameel Poverty Action Lab, have been working with the Gujarat Pollution Control Board for over a decade now. Gujarat is a very industrial state, with high levels of pollution. We started by working with the board on how to get good information on pollution levels. We identified ways to improve reports put out by auditors. During the course of that study, it became clear that to get information at scale on a regular basis we would need to go beyond manual readings by inspectors or auditors. That brought us to the question of, is there a way that you can improve on individual, manual-based systems, especially in a state or a country with relatively low state capacity and less staff. So, the two parts came together: First, can you actually measure particulate matter in a continuous way? This led us to introduce continuous emission monitoring systems. And second, once you have this kind of continuous emissions monitoring system in place, can you leverage an emission trading system as a more efficient way of reducing emissions.

What is your role as researchers in such a pilot program?

Ryan: In broad strokes, it has two parts. One is in design — to help identify rules and give advice on what would make a market work well, for example, about the frequency of trade, the monitoring of emissions, and what to do if emissions data is not reported.

Second is the evaluation part: to see if the program is working, to monitor how it’s going, to measure how much pollution has declined, how much have abatement costs declined. There are a large number of plants in Surat, the city in Gujarat where our first experiment was based. We worked with a sample of about 350 plants and the evaluation design was a randomized controlled trial. Half of those plants remained on the traditional regulation based on setting limits and punishing businesses that exceed those limits. And the other half of the plants shifted on to the emissions trading system in which an overall limit was set on the emissions among that group and then they could trade, but only among themselves and not with this control group of firms. In principle, that would allow us to measure the sort of combined benefits of the cap-and-trade package together as compared to this other group of firms who are going on about their business in the traditional way of regulation.

What were the results?

Ryan: Early results show two main things. First, the monitoring regime works pretty well: A large fraction of plants — over 90% at a given time — are reporting data on pollution. That, in itself, is remarkable. Most of the legwork and setting up the market involved moving to this new monitoring regime with continuous emissions monitoring systems — that is, installing devices in the chimneys of each factory that beamed pollution readings back to the regulator. And then the second aspect was pollution in the treatment group appears to have come down pretty sharply — by about 24% relative to that in the control group. That reduction has been sustained, although the market has been interrupted by India’s Covid lockdowns and other troubles in the meantime.

What does it mean for India that Punjab is going to do this pilot?

Ryan: Oh, it’s wonderful. The particulate matter problem is also very much present in Punjab, as in much of north India. In many places, especially urban areas, industry remains a pretty large source of emissions. And so, this model is only going to make a dent in particulate emissions if it’s scaled and taken up by many other states. Ideally, this would be a kind of generic toolkit that many different state regulators would adopt.

The Economic Growth Center has a mission to study development and poverty reduction. How does work on air pollution fit into that agenda?

Pande: Air pollution is one of the largest killers of individuals, especially in lower-income countries that are quickly industrializing, like India. Any policy that successfully reduces air pollution is going to have a clear health benefit for some of the poorest populations. In addition, as we think about responses to climate change, you’re going to not just set targets for countries but actually ask how they’re going to implement these targets. The emissions trading system is one way of trying to think about how you can reach that target. We know that climate change is going to directly hit countries in South Asia and its poor citizens particularly hard. We care about reducing climate change as a global good but it is also the case that some of the hardest-hit countries by climate change are going to be in the developing world.

This interview has been edited for brevity. A full version can be found on the Economic Growth Center’s website.