Women, work, peace: What the artisans from South Asia can tell us 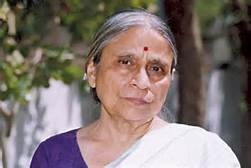 On April 10 the South Asian Studies Council at the MacMillan Center welcomed Ela Bhatt, founder of the Self-Employed Womens’ Association (SEWA) and the SEWA bank for women in India. Dr. Bhatt spoke at the Indu Bhatt Annual Memorial Lecture on the topic of “Women, Work, and Peace: What the Artisans from South Asia Can Tell Us.” (view video) She began the lecture by emphasizing the khadi, handspun, hand-woven cloth, which is worn in solidarity with the poor and India’s small economic producers. As a young lawyer at the Textile Labour Association (TLA) in India, Dr. Bhatt recognized the large role that poor, self-employed women played in supporting their families. “No one saw the women as workers,” said Dr. Bhatt. “They were invisible to the nation.”

These observations laid the foundation for SEWA, an organization that brings self-employed women together and “straddles both union and cooperative.” Since its founding in 1972, SEWA’s membership has grown to 1.7 million, making it the largest union in India and the largest union of informal workers in the world. At the lecture, Dr. Bhatt described challenges in SEWA’s early years, including bank loan refusals. The SEWA Cooperative Bank was established in 1974 to help women obtain small loans to own the tools of their trades. SEWA provided “raw materials, tools, and most importantly, markets” to its members, but Dr. Bhatt stressed workers’ high skill levels. “Their range of skills became the greatest skills at times of need.”

“Poverty is nothing but a form of violence and injustice,” stated Dr. Bhatt. Steps toward economic freedom “bring a woman her own identity” and help mitigate this violence. In her concluding remarks, Dr. Bhatt urged the audience to “look at work in a different light” and to support self-employed artisans.