Why protesting Indians are chanting the Constitution 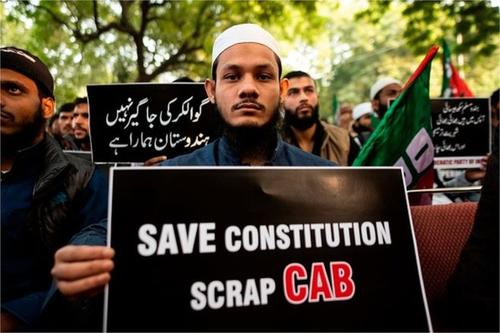 For more than a month now, men and women, young and old, have gathered in large numbers on streets and university campuses across India to protest against a new citizenship law which they believe is discriminatory.

There, they have been invoking the Constitution and chanting its solemn preamble, which promises justice, equality and fraternity and embodies the basic features of the nation’s founding document.

The mass readings have revealed a deeper public engagement with the Constitution than commonly thought. So far most believed the Constitution hadn’t travelled much in the public imagination beyond dreary classroom lessons.

India’s Constitution, which took four years to write, is the world’s longest founding document. The text governs more than a billion people who practise almost every mainstream religion.

The voluminous document contains more than 450 Articles and 12 Schedules and is painstakingly detailed. It is also, according to legal scholar Upendra Baxi, an “unparalleled exercise in verbosity”, with the text scaling some “extraordinarily ludic heights”. Article 367, for example, makes it clear that a foreign state “means a State other than India”. The text has been amended more than 100 times since 1950.

Born in the aftermath of a bloody partition and independence, and written amid differences over the “religious and national vision” of what India should be, the Constitution is a remarkable document.