We Are Witnessing a Rediscovery of India’s Republic 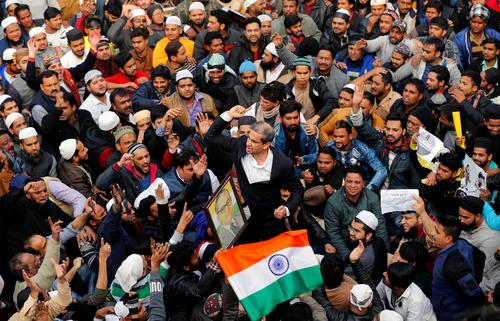 Indians protesting against a discriminatory citizenship law are using the Constitution as a rallying cry.

NEW DELHI — As India’s new citizenship law seeks to create a stratified citizenship based on religion, a large number of Indians opposing it are emerging as a people of one book, the country’s Constitution, which came into force on Jan. 26, 1950.

In the past two weeks, diverse crowds across the country have responded to the discriminatory Citizenship Amendment Act, referred to as the C.A.A., passed by Prime Minister Narendra Modi’s Hindu nationalist government by chanting the preamble to the Constitution of India, with its promises of social, political and economic justice, freedom of thought, expression and belief, equality and fraternity.

Student protesters being herded into police vans, opposition leaders standing outside the Indian Parliament and ebullient crowds of tens of thousands in Hyderabad, Delhi, Kolkata, Mumbai and Chennai have read aloud the preamble and held aloft copies of the Constitution and portraits of B.R. Ambedkar, its chief draftsman.

The C.A.A. offers an accelerated pathway to citizenship for Hindu, Sikh, Zoroastrian, Buddhist and Christian migrants from Pakistan, Bangladesh and Afghanistan but excludes Muslims. It effectively creates a hierarchical system of citizenship determined by an individual’s religion, reminiscent of Myanmar’s 1982 Citizenship Law, which privileged citizenship for “indigenous races,” excluded the Rohingya and paved the ground for the genocidal violence against them.