Understanding the Rohingya crisis: Race, religion, and violence in Burma 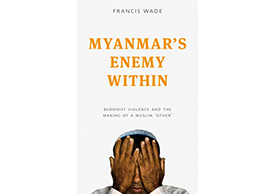 Francis Wade, freelance journalist and long-time correspondent of Burmese politics, spoke at Henry R. Luce Hall Auditorium on November 10 about his new book, Myanmar’s Enemy Within: Buddhist Nationalism and Anti-Muslim Violence (Zed Books, 2017). (view video) Wade’s work has appeared in, among others, Time Magazine, The Guardian, Al Jazeera English, Asia Times Online, Foreign Policy, and the Los Angeles Review of Books. He previously worked as an editor and reporter for the Democratic Voice of Burma, an exiled Burmese news organization based in Thailand. Wade, and the immediate context of his book, was introduced by Elliott Prasse-Freeman, graduate student in anthropology. They were joined on the panel by Kyaw Hsan Hlaing, an activist from the Rakhine State; U Myo Win, Director of Smile Education and Development Foundation in Rangoon; and Professor James C. Scott, Sterling Professor of Political Science and Professor of Anthropology.

Wade’s book studies the predicament of the Rohingyas, a largely Muslim ethnic minority in Burma’s Rakhine State. The Rohingyas have been persecuted by the Burmese state for many decades and were denied citizenship since 1982. Lacking basic facilities and employment opportunities, more than a million Rohingyas have escaped to neighboring countries over the years. However, their condition in Burma has only become worse.

Wade began by lamenting the little coverage the latest Rohingya crisis—since August 2017—has received in the international media. “The world is waking up to the crisis,” Wade said, “but it’s too little too late.” The flow of refugees from Burma’s Rakhine State to Bangladesh and other parts of Asia has been the most concentrated flight of people since the Rwandan genocide. “Most refugees are in poor mental and physical condition,” Wade reported, and understandably so because of the level of destruction of Rohingya property and livelihood. More than 200 Rohingya villages have been destroyed since August, while journalists have been cut off from northern Rakhine State. “We have to reconstruct this account from eyewitness testimonies and satellite imagery,” Wade said.

Some preconceived notions about Burma and the nascent democratic movement there, Wade maintained, have hindered a true appreciation of the human calamity in process in the Rakhine State. The most important, of course, being the assumption that Buddhists are an essentially peaceful people. “We have missed the perspective of the insiders in perpetrating violence, a fact that is shocking in Burma because of a population that seemed so against divisive politics under military rule,” said Wade.

“The Rohingya are constructed as a threat to the national community. Their forcible removal from the Rakhine State is an elaborate program of ethnic violence.” For Wade, the shock of the outside world at these developments is “fed by a binary vision of a bad military pitted against a good society in Burma.” But though the campaign against the Rohingyas is now ostensibly a military one, we should remember the history of communal conflicts between the Rohingyas and the Rakhine Buddhists.

The violence of 2012, for Wade, was a precursor to the current situation in Burma. “Prior to 2012, there were inter-communal relations and a network of informal social relations. However, after June 2012, the Rohingyas were segregated, confined to internment camps and their mobility restricted.” The distance this created between the two communities, Wade said, “widened communal fissures and hardened divisive perceptions.” As the Rakhine Buddhists retreated to their own enclaves, people looked inward for solidarity and security. “There was a mental shift in which individual Rohingya acts were taken to stand in for the entire group. The idea of the malevolent Rohingya became a staple of the Rakhine imagination.”

Another reason why the Rohingya crisis has taken the world by surprise has been the nonexistent interrogation of the political opposition under military rule in Burma. Since it was against the military government and pro-democracy, it was assumed that it subscribed to equal rights for all. However, the exclusionary streak within pro-democracy Buddhists remained under wraps.

Many politicians, Wade further reported, “view the violence as politically profitable,” since ethnic violence invariably leads to co-ethnic voting. “The fear of the reversal of group-status remains an age-old trigger for mass violence.” The military’s campaign against the Rohingyas is viewed to be in support of the nascent democracy in Burma. “The removal of the Rohingyas would spread the benefits of democracy better to the indigenous population,” said Wade.

“In Burma, democracy is understood as a zero-sum game,” Wade cautioned. The forcible population transfer initiated by the military is part of a new strategy of the reclamation or re-colonization of Rohingya land. Rohingya crops are now reaped by the state and redistributed to the Rakhine Buddhists, while the land itself has become state property. “There is an effort to claim that Rohingya land is in fact Buddhist land,” Wade said. For the Rohingya, life in Burma appears now to be an endless chain of expropriation and exclusion.

Wade’s co-panelists offered some more context and history surrounding the Rohingya issue. Kyaw Hsan Hlaing, no stranger to the excesses of the Burmese state, asked the audience to consider the colonial history of Burma as part of the creation of the Rohingya “other.” One of the more important flashpoints in the Rohingya-Rakhine rivalry was Rohingya support for the British during the Second World War, which led the Rakhine to ally with the Japanese. Another was in 1946, on the eve of independence, when the Rohingyas wanted to join the Rakhine State to East Pakistan. Such a move has forever marked Rohingya political activity with suspicion and assisted the creation of their “separatist” identity. “There is no accountability on either side,” Hlaing said, which has led to such an escalation of the conflict.

U Myo Win highlighted that “there is no proper mechanism to determine Burmese citizenship.” At a time when the Rohingyas are represented as the enemies of the state, it is nothing but “a kind of apartheid policy which is being practiced in Burma.” Win informed the audience of anonymous propaganda literature targeting the Rohingyas and other Muslim communities which circulated widely in the country during the 1990s and led to anti-Muslim campaigns in a number of cities. “Because of this literature, there is a widespread hatred of Muslims in Burma and an erosion of toleration and diversity,” Win said.

For James C. Scott the question to ask was how such “a lot of combustible material was built up in Burma over the last 30 years such that any sort of spark would lead to a huge conflagration.” He assessed that the violence against the Rohingyas “will cast dark shadow on Burma for the next fifty years. It’s a great stain on the Burmese nation.” Scott mentioned that several of his pro-democracy Burmese colleagues had turned a blind eye to the Rohingya crisis in order to first secure a new constitution. “But this is the biggest ethnic cleansing since the Second World War. What kind of democracy can be built on such a foundation?” he asked. “It’s a dangerous example of the institutional impunity of the military and reestablishes its centrality to Burmese politics heading into the future,” Scott maintained.

The audience engaged in a spirited conversation with the panelists, asking a range of questions related to political, social, and economic life in the Rakhine State. The topics varied from the awareness of democratic means and the actual process of democratization to policy implementation and the emergence of land as a commodity as opposed to a factor of production. The evening concluded with a clip from Sittwe, a short documentary by Jeanne Hallacy, which depicts the “separate realities” of segregated life in the Rakhine State.

Francis Wade, Kyaw Hsan Hlaing, and U Myo Win came to Yale on the invitation of the Poynter Fellowship in Journalism, the Schell Center for International Human Rights at the Yale Law School, and the Council on Southeast Asia Studies at the Macmillan Center. For more information on Wade’s new book, visit: https://www.zedbooks.net/shop/book/myanmars-enemy-within/.