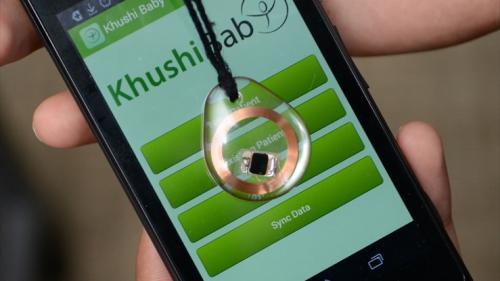 What started as a Yale undergraduate project is on its way to becoming a global health innovation that could lead to improved immunization for children in the developing world.
Khushi Baby (“khushi” means “happy” in Hindi) is a necklace containing a computer chip that stores up to two years of immunization records for young children. When linked to a mobile application using Near Field Communication technology, health care workers seeing patients in remote villages in India can access real-time data to help them ensure that children get and stay up to date on all of their necessary vaccinations.
Khushi Baby won the Yale School of Public Health’s inaugural Thorne Prize in 2014. Sponsored by InnovateHealth Yale, the prize awards $25,000 to the best student-led venture focused on social innovation in health or education. In November, the team went on to win UNICEF’s Wearables for Good Challenge, which provided them with an additional $15,000 in funding, as well as incubation and mentoring to grow the project.
Co-founder Ruchit Nagar, an M.P.H. student in the Department of Epidemiology of Microbial Diseases, and an interdisciplinary team of students conceived of Khushi Baby at the School of Engineering and Applied Sciences in a class, “Appropriate Technology in the Developing World,” co-taught by Dr. Joseph Zinter and Bo Hopkins, a lecturer at Yale. In addition to Nagar, the student team currently includes Praneeth Sadda, YSM ’18, Preethi Venkat, M.P.H. ’16, and Tyler Petrochko, Yale College ’18. The team, meanwhile, has also grown globally with Mohammed Shahnawaz and Sanjana Malhotra leading operations in India.
With their Thorne Prize award, the team traveled to India last year to flesh out their idea for a wearable immunization record. There, they got the input of nearly 100 mothers of small children, as well as local health care workers, as to the form of the technology; possible options included a bracelet, anklet or necklace. “Kids are already wearing these types of necklaces for cultural reasons, so it made sense,” said Nagar. “But we wouldn’t have known that had we not talked to the community.”
Nagar and his team see their necklace as a way to educate and engage local communities on vaccination, and encourage them to visit established vaccination camps for health services. “The big challenge is that vaccination is a preventative measure, and you don’t see the immediate effects of getting stabbed with a needle. All you see is your child crying,” said Nagar. “Building a level of awareness and trust is so important.”
A research study is currently underway to determine how well the necklace works to increase immunization rates, which Nagar estimates to vary widely, but average between 50 percent to 60 percent in India’s rural areas, well below the World Health Organization’s benchmark of 90 percent. The team is also testing the use of automated voicemails, designed by Sadda and recorded in local dialect, that remind mothers to bring children in for health care services. According to Nagar, the preliminary study data, which will be finalized in the spring, shows that the combination of the necklace and voicemails are having a positive impact on getting kids vaccinated on time.
Next, Khushi Baby plans to continue their impact evaluation, and to scale up. They hope to eventually integrate their system with the existing national health care registry in India, and ultimately transform how data is fed into the system, making it more streamlined and accessible from even the most remote areas.
About 500 children in India are currently wearing the Khushi Baby necklace, and 1,400 children have been tracked to date. Nagar and his team hope this number will expand rapidly in the coming year and that by the end of 2016 as many as 5,000 children will be wearing a Khushi Baby necklace.
Down the line, Nagar said the device could be introduced in other areas with low immunization rates, such as parts of Nigeria, Pakistan or Latin America. The small computer chip in Khushi Baby could transform the devise into a variety of forms, making it culturally accessible anywhere in the world, as well as store new forms of health information for the pregnant mother as well.
“The financial sector often talks about return on investment, and in dollar terms our $25,000 award has resulted in Khushi Baby securing over $300,000 in gifts and grants” said Martin Klein, director of InnovateHealth Yale and associate dean for development and external affairs at the School of Public Health. “But the return that matters most is the tens of thousands of children who will be immunized thanks to the Khushi Baby team.”