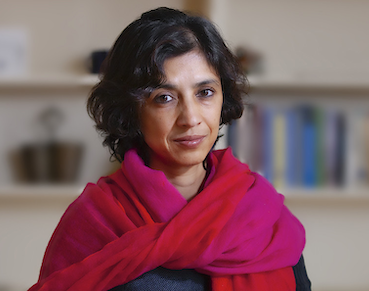 Rohini Pande has been awarded the 2022 Infosys Prize for Social Science, among the largest awards in India recognizing excellence in science and research. The prize was announced in a press conference in Bangalore, streamed live on November 15, 2022.

Pande is Henry J. Heinz II Professor of Economics, Director of the Economic Growth Center (EGC), and Director of Inclusion Economics at Yale University. EGC now has two faculty members who have won the Infosys Prize: Kaivan Munshi was a winner in 2016.

According to the citation, the prize was awarded to Pande, “for her outstanding research on subjects of key importance, including governance and accountability, women’s empowerment, the role of credit in the lives of the poor, and the environment. Her empirical findings, based on diverse methodologies, offer major promise and potential for policy design in emerging economies, including India.” Read the full citation below.

Kaushik Basu, Professor of Economics at Cornell University and former Chief Economist of the World Bank who served as Jury Chair, said, “Rohini’s creativity, grit, and prolific research output are not only of great value to all emerging economies, including India, but an inspiration for young economists venturing into the exciting world of research.”

According to the Infosys Foundation website, the prize “endeavors to elevate the prestige of science and research in India and inspire young Indians to choose a vocation in research.” Infosys Prizes are also given in five other fields: Engineering and Computer Sciences, Humanities, Life Sciences, Mathematical Sciences, Physical Sciences and Social Sciences. The honor includes a gold medallion and the equivalent of $100,000 USD in Rupees.