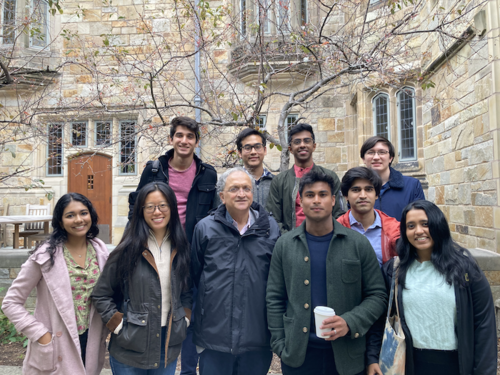 The South Asian Studies Council was pleased to host Ramachandra Guha, the preeminent historian of modern India, for a series of four public lectures from October 2nd to October 15th. Guha’s acclaimed books include: The Unquiet Woods, an environmental history; A Corner of a Foreign Field, a history of cricket in India; Gandhi Before India and Gandhi: The Years That Changed the World, a two-volume biography of Mahatma Gandhi; and India After Gandhi. Guha’s works have been translated into over 20 languages, and he is a prolific essayist and columnist read weekly by millions. India After Gandhi was named a book of the year by The Economist, Washington Post, and Wall Street Journal. Guha’s Gandhi biographies are being adapted into a streaming series.

On October 6th, Guha delivered the prestigious George Herbert Walker, Jr. Lecture at Yale MacMillan entitled “Personality Cults and Democratic Decline,” which centered on the ramifications of national personality cults in Indian politics. An article about the talk is available here[1] .

On October 7th, Guha gave the Annual Gandhi Lecture on “Beyond Racial Binaries: Western Fighters for India’s Freedom.” The topic of the lecture anticipates his book Rebels Against the Raj: Western Fighters for India’s Freedom, which has been praised by reviewers for its insight into little-known aspects of the Indian independence struggle and its lessons for modern India. A link to the recorded lecture is available here[2] .

On October 11th, “The Journey of an Accidental Sports Historian” reflected on Guha’s A Corner of a Foreign Field and spoke to the future of sports history in South Asia.

Finally, on October 13th, the panel “Scholars in the Public Sphere” featured Guha in conversation with Yale faculty Sarah Khan, Kiran Kumbhar, Madiha Tahir, and Rohit De. A link to the recorded lecture is available here[3] .

At the end of his visit, Guha also recorded a podcast with Professor Sunil Amrith, Chair of the South Asian Studies Council, and SASC Student Fellow Daevan Mangalmurti. Their conversation reflects on Guha’s long association with Yale, the field of South Asian Studies, and the importance of history to society. The link is available here.

Guha’s visit presented an exciting opportunity for undergraduate and graduate students across the university to converse with him about the state of modern India, topics of research, and sports and society. Guha generously spent time meeting with graduate students from the School of Management, Graduate School of Arts and Sciences, Yale Law School, and Jackson School of Global Affairs in a series of meals that facilitated interdisciplinary connections and conversations. Guha also had lunches with undergraduates taking Professor Rohit De’s course “India and Pakistan since 1947,” which uses India After Gandhi as a textbook; from the Salus Populi Foundation, a student organization promoting development economics; and the South Asian Society. Students uniformly noted Guha’s candidness in conversation, his willingness to answer a broad range of questions, and his interest in their own classes and research. Professor Amrith noted that Guha’s visit injected an energy and enthusiasm into South Asia at Yale that could be felt across the campus.

Guha is currently Distinguished University Professor at Krea University. His many awards include the Leopold-Hidy Prize, the Howard Milton Prize, the Sahitya Akademi Award, the Padma Bhushan, and the Fukuoka Prize. Guha was formerly a Visiting Professor at Yale, and was honored with an honorary doctorate in the humanities by Yale in 2014. He is the only person to give the Annual Gandhi Lecture three times.