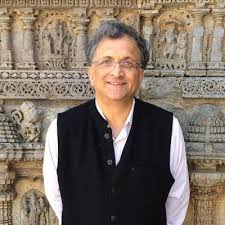 The South Asian Studies Council was honored to have Ramachandra Guha, noted historian, biographer and public thinker, deliver the Annual Gandhi Lecture in October 2018. In his lecture, Dr. Guha spoke on the subject of his new book, Gandhi: The Years That Changed The World, 1914-48. (view lecture)

Although Gandhi is by no means an understudied figure, Dr. Guha prefaced his talk by saying that “every generation of Indians needs a fresh assessment of Gandhi.” Indeed, at a time when governments are rewriting histories of the independence struggle to sideline figures like Gandhi and Nehru, renewed conversation on Gandhi, his values, and the figures around him is welcome. Meanwhile, Dr. Guha’s book, beyond his easy-to-read narrative that we are all used to, also includes an entirely new historical archive – some of Gandhi’s personal papers – that offer new light on the man and his beliefs.

As is oft with someone with Dr. Guha’s variety of intellectual expertise, his conversation with the 120-odd attendees ranged beyond the contents of his book. Although Dr. Guha did speak of Gandhi’s changing political and moral beliefs, his flaws, quirks and moments of genius, and his relationship with leaders around him – notably, Rajagopalachari, Nehru and Patel – and cited a letter in which the three were aptly described as the head, heart and hands of Gandhi respectively. At the same time, Dr. Guha brought out new historiographical or biographical additions, mentioning, for example, the role of Gandhi’s lesser-known secretary Mahadev Desai.

Of course, the conversation that followed his talk, moderated by political science professor Karuna Mantena, spilt over into the present, and Dr. Guha offered a number of sharp and lucid comments about more recent political developments in India, as well as the most pressing economic, social and political challenges faced by India today. Dr. Guha entertained a number of questions both formally and informally during the dinner that followed, speaking about everything from politics to cricket to the environment.

In particular, Dr. Guha’s insistence on being a “public historian,” one who writes not for a select group of fellow academics but also for the consumption of the wider public, was quite notable. When asked about the public nature of his work, Dr. Guha wittily replied by saying that the writing of history must be public. With a similar degree of approachability to the man himself, Dr. Guha proved inspirational for many members of the audience, whether student, faculty or member of the public.