Picturing the Lowland: Coastal societies of the Bay of Bengal 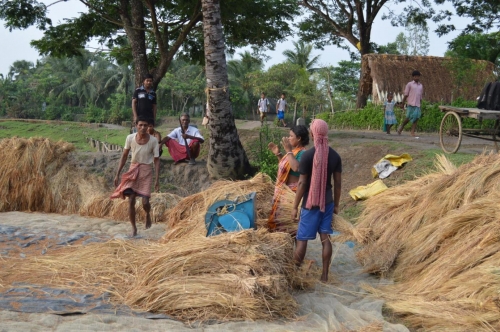 The InterAsia photo exhibition currently being showcased in the Department of Anthropology at Yale features twenty photographs taken and curated by Debojyoti Das, a postdoctoral fellow in the South Asian Studies Council (SAS) at the MacMillan Center. It is open to public until May 30. The exhibit can be viewed online at its website. The exhibition is supported by SAS, InterAsia Initiative at Yale, Department of Anthropology, and the Social Science Research Council.

An Indian-born, British-based ethnographer, Das tries to photograph his subject from a different perspective to give viewers something new and memorable. His work has been included in exhibitions held in India at the Indian Museum, Kolkata, South Asian University, New Delhi, and in the UK at the Nehru Center, Indian High Commission, and Sussex University.

Debojyoti’s visual ethnographic and arts-based project provide an understanding of coastal societies in the Bay of Bengal delta. It focuses on the littoral seaboard that connects Asia through the Indian Ocean maritime trade route. The Bay of Bengal is a polyfocal landscape that has been at the axis of South Asia trade networks. It is a part land-part water milieu that supports the world’s largest mangrove megafauna. The region is exposed to devastating tropical cyclones and sea surges that have been damaging to human settlements.

When the East India Company, and later the British Crown, colonised the Bengal delta through permeant settlement, their sole aim was to expand the revenue base of the Bengal Presidency. In the medieval vernacular literature, such as the Mangal Kavya, the delta seaboard has been aptly referred to as the land of eighteen tides—atharo bhatir desh. European officials who surveyed the region called the delta archipelago “Sundarban” meaning “beautiful forest” in their reports. It is undeniably a “hybrid landscape,” where the waters of two mighty rivers – the Ganges and the Brahmaputra – meet to form the world’s largest delta. The liminality of the landscape is marked by vanishing islands that emerge and disappear with geomorphic processes of land formation. In this water-based economy, the riverine communities are socially connected through dispersed village settlements and weekly markets (locally known as haat bazaar). The rivers are not just channels of water; they carry a thriving trade, transporting people, goods, and ideas from one part of the delta to another. A lot has been written on the flora and fauna of the delta, but there is hardly any significant visual work that captures the lives of communities who struggle routinely to live with the fear of man-eating tigers, alligators, venomous reptiles, and natural calamities such as cyclones and tropical storms.

In recent decades, the lives of communities living in the coastal belt has been compromised by state driven development projects such as the Rampal thermal power plant proposed jointly by India and Bangladesh. Also, the powerful ship breaking (the process of dismantling an obsolete vessel’s structure for scrapping or disposal) industry in Chittagong is creating a massive livelihood crisis in Bangladesh’s Sitakund coastal seaboard as toxic litter pollutes the coastal water and kills off the fish. Conversely, in West Bengal, India, people living in the Sundarbans have opened up their community spaces for the influx of tourists. This has allowed the unregulated entry of engine boats and the transport of fly ash (pulverized fuel ash) from Calcutta port to Dhaka by big trawlers, causing oil spills and polluting the pristine backwaters. The increase in tourism has created a demand for guesthouses and hotels in the delta, which further stress the fragile delta ecology. Additionally, shrimp farming has significantly damaged the mangrove forest. In India and Bangladesh, human intervention and changing state policies in favour of neo-liberalization and globalization have adversely affected coastal environment.

The exhibit displays the coastal community’s everyday struggles with their environment and aspirations for improvement, as well as the local beliefs and customs. It also showcases the connected history of the region and illustrates its relation with nature and culture that until now has escaped scholarly attention. Through the visual display of artwork and the everyday mundane activities of communities living in the delta, Das demonstrates the symbiotic relationships that exist and manifest through their livelihood and everyday practices.