Notes from abroad: Studying the Role of International Coalitions of Cities in Local Environmental Planning 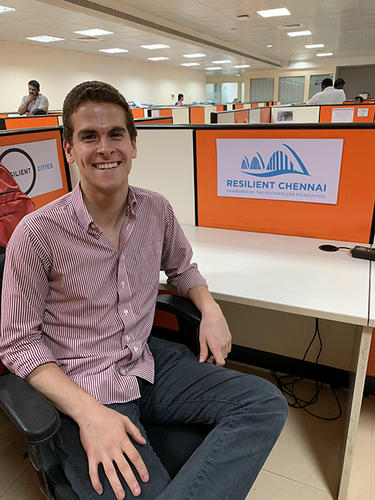 On June 18, BBC reported that reservoirs in Chennai, India, the country’s sixth largest city, had “run dry.” Just three days later, the New York Times published a similar article, noting that “Chennai, an Indian city of nearly 5 million, is running out of water.” That multiple Western news outlets covered environmental issues in Chennai, an urban hub that rarely makes international headlines, signaled that the city was on the brink of a crisis.

Although many of my friends in the United States were shocked that southeastern India was facing such an extreme drought, the news stories did not surprise me. Thanks to the Rustgi Fellowship from the MacMillan Center’s South Asian Studies Council, I had just lived in Chennai from May 4 to June 8 to study how the city’s municipal officials approach water management. More specifically, I traveled to the capital of India’s most urbanized state to research Water as Leverage (WaL), an initiative launched by the Netherlands Enterprise Agency (RVO) which aims to help cities in South and Southeast Asia consult Dutch knowledge of flood mitigation to bolster environmental planning strategies. WaL will serve as a case study in my anthropology senior thesis, which broadly addresses how, in an era of globalization, cities function as international environmental actors, designing policies that influence not only local architectural decisions but also construction choices around the world. Because Amsterdam is a global leader in coastal resilience and Indian cities are hyper-exposed to the effects of climate change, WaL provides an ideal lens through which scholars can investigate the intercontinental role of municipal sustainability experts.

I traveled to Chennai hoping to uncover how the city’s Chief Resilience Officer interacts with representatives from the RVO. I wanted to observe whether Chennai incorporates Dutch recommendations into its flood plans or merely uses WaL to brand itself as a worldly, climate-conscious metropolis. Accordingly, I spent most of my time at the headquarters of the Greater Chennai Corporation interviewing employees of Resilient Chennai, the City’s special project devoted to climate adaptation. I also spoke with researchers from the Indian Institute of Technology Madras and Care Earth Trust who oversee the seven water projects funded by WaL. Almost every person I communicated with told me that Dutch involvement in Chennai’s water struggles has benefited the City not because RVO officials understand how to navigate southeastern Indian geographies but because they recognize how to finance major infrastructural proposals. Chennai’s Chief Resilience Officer felt confident that, with the help of the Dutch Water Envoy, the City would successfully receive grant funding from international development banks. These comments exposed me to an alternate outcome of globalized resilience planning that I had not considered prior to my trip; when designed in conjunction with other world cities, local projects entice financiers.

Although Chennai has not solved its water woes, as evidenced by recent news reports, it has perhaps unlocked new resources that will allow it to advance toward sustainable drought and flood regulation. I plan on keeping in touch with all of my interviewees throughout this coming school year to track WaL’s progress and better assess the RVO’s impact, both positive and negative, in southeastern India.