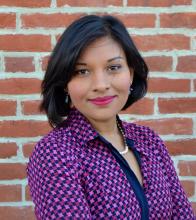 Mayesha Alam, a doctoral student in political science, a Global Health Justice Fellow at Yale Law School, and author of Women and Transitional Justice, was interviewed on CNN International by Isha Sesay about the ongoing Rohingya crisis. The two-part interview (links below) examines the prevalence and patterns of sexual violence as part of the ethnic cleansing campaign against the Rohingya in Myanmar; highlights the risks and insecurities that women and girls face in refugee camps in Bangladesh; and cautions against forced repatriation of refugees. In December 2017, Mayesha conducted research fieldwork in the border region where the refugee crisis was unfolding, thanks to support from the MacMillan Center. You can also read about how the Rohingya influx is impacting Bangladesh in this article Mayesha authored in The Washington Post.