Made with Soul: Atma Leather Solves Problems at the Intersection of South Asia and Sustainability with Banana Fiber “Leather” 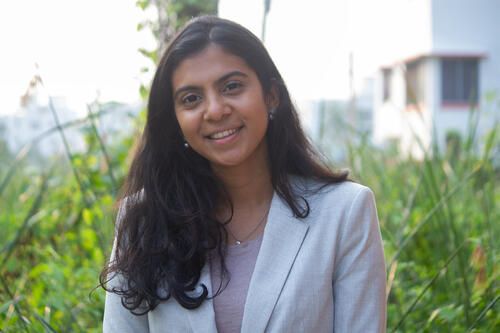 Flies buzz, shadows loom. The stench of carcasses percolates out of dingy low-rise concrete buildings as menacing, cleaver-wielding goons stride over. In any Bollywood movie in which it appears, the leather tanning neighborhood is a haven for crime and villainy—the dark side of society. But the real villain may be the leather making process itself. Tanning requires immense energy and water inputs, entails animal cruelty, and emits toxic pollutants. There are costs for both people and the planet.

In Kanpur, India, untreated effluent from tanneries carries heavy metals like chromium into the Ganges River. From there it makes its way into drinking water, crops, and soil, causing congenital defects and debilitating skin diseases. All this effort requires resources: a single leather handbag uses up 18,000 liters of water. That’s enough to meet the daily needs of over 5,600 people.

In her first year at the Yale School of the Environment, Jinali Mody YSE ’23 was looking for areas in climate and sustainability where a startup might be able to make a tangible difference. She found her niche in a surprising intersection between the problems plaguing leather making and another industry: agriculture.

In India, where Mody is from, 350 million tonnes of agricultural waste are generated each year. That quantity makes up 35% of the global total of around a billion tonnes of crop waste. Most crops produce as much or more waste than they do usable products. India, for example, is the world’s biggest banana producer. During every harvest, 80% of the banana plant ends up wasted—around 120 million tonnes. “There’s so much more waste than we have people trying to use it,” Mody said. “It would be great if we ran out.” But as things stand, there’s little chance of that happening. Less than 10% of banana waste alone is used in some way, and the amount of waste generated each year is growing. Much of the time, banana waste and other crop waste are simply burnt or left to decompose, yielding pollution and emissions of greenhouse gasses like methane and carbon dioxide.

Inspired by the twin problems of leather making and crop waste, Mody came to Startup Yale in April 2022 with a pitch: Atma Leather, a company manufacturing plant-based, cruelty-free leather from crop waste. She walked out with the audience choice award in the sustainability category—and cash. “When I pitched Atma, it was just an idea,” Mody said. “Then I got $25,000 from Startup Yale’s 2022 Sustainable Venture Prize and could suddenly make it a reality.”

Armed with funding and a good idea, Mody headed back to India to get the company off the ground. “It was crazy. It all started with finding my Head of R&D, Shshank Srivastava, who was born and brought up in Kanpur and knows the ins and outs of the leather industry and spent the last decade working in the fashion industry. I met many people along the way who said they knew how to make plant leather, but it is extremely complex and challenging. You have to make a material that lasts very long and you have to do it sustainably. That’s not easy. We then began to search for a space and saw more than 50 spaces in Calcutta before we found our perfect facility. Then began our search for the basic machinery we would need. As things began to fall into place, we started to find a team. We found Kaushal, our procurement expert, and hired the bulk of our team from the Government College of Engineering and Leather Technology in Calcutta. Our team is now 13 people, of whom 60% are women.”

As she built her team, Mody and Srivastava researched various plant-based options for months. After testing out waste from crops like mangos and wheat, they settled on using banana stems as the material for Atma’s initial product line, Banofi (from banana fiber) leather. Bananas don’t grow from the same stalk twice, so the stems, the bulk of the crop, are discarded after every harvest. Those stems are ideal for leather production: their high nutrient content and versatility mean Atma’s Banofi leather can be made to look, feel, and work just like real leather. To ensure that the product is sustainable and effective, Mody has thought out her choices. The backing on the leather is made from recycled plastic. And to make sure that there are no problems with the product, Atma is taking only small-scale orders for the next year—enough time to make sure Banofi is tried and tested. She’s also worked at whirlwind speed to make sure that when Banofi is ready to go big, there are no glitches. The company’s team now includes 13 people, most of whom are focused on R&D, and Mody carries samples with her everywhere she goes. Despite six months of travel and handling, when she pulled them out for me to see on a recent Friday at Tsai CITY, they looked as good as advertised—and felt and smelled just like real leather. Mody is fulfilling Atma’s first order—150 leather-bound notebooks for the Yale School of Management—this month, and she has buyers at small boutiques and major fashion houses alike interested in using Banofi in their products. Mody expects the next few years to require plenty of travel in Europe and the United States. But she envisions Atma remaining based in India, where it benefits from proximity to both the farmers it works with and the manufacturers it hopes to sell to.

Mody came to YSE after three years at McKinsey and a brief stint as Head of Strategy for a startup in the plastic recycling space. When she arrived, she wasn’t sure if she’d go back or not. Now she’s certain that scaling Atma will be her mission for at least the next couple years. “I do want to work on this and I do want to give it a solid five or six year chance. Startups take a long time, especially startups where you’re inventing something.” Mody credits the startup culture at Yale and Tsai CITY for motivating her to pursue her passion for solving problems in the climate and sustainability space. “Coming to YSE was really great, because there are a lot of startups out of YSE. My first semester I had a job at Tsai CITY where I saw a lot of student founders and people who had fully fledged businesses. And I said to myself, ‘This is the perfect place to try. What’s the worst that could happen?’ There’s very little risk to starting up in school. I realized I could leave with not just a degree but a business in something that I’m very passionate about.”