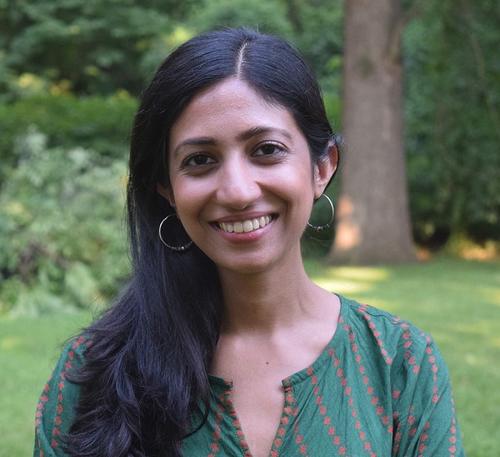 After a year as a postgraduate associate, Sarah Khan has joined the South Asian Studies Council faculty as a member of the Political Science department. Her research delves into the comparative politics of South Asia, exploring various intersections of gender and politics. Our South Asia fellow Ram Vishwanathan caught up with Prof. Khan to find out a little more about her academic interests, her journey to Yale, and her hopes for the future.

RV: Let’s start with your current research – tell us a little more!

SK: I’m currently investigating women’s political participation in Pakistan from a comparative perspective. It’s an interesting time to look into this, with a consolidation of democratic elections over three cycles, but a persistent gender gap in voter turnout and candidacy. I’m trying to understand why this gap exists, primarily through collaborating with researchers and civil society organizations to examine the impacts of voter mobilization campaigns targeting women. Initial results of our work show that it is necessary to engage male decision-makers to mobilize women to turnout in elections.

Another strand of my work deals with the issue of violence against women. Along with collaborators, I have collected survey data from men and women including members of women’s Self Help Groups, on experiences, attitudes and norms of violence in the home and public spaces in urban Madhya Pradesh (MP). We use this data to understand the drivers of such violence at the individual and community level, and also to determine whether advocacy campaigns through Self Help Groups can help make change.

RV: It appears that a lot of your work involves partnering with various organizations. What does that look like?

SK: The ability to partner with organizations is very rewarding. It informs the kinds of questions I ask, of course.

When partnering with organizations, one has to strike the right balance between designing studies that can answer questions that are conceptually salient from an academic standpoint, and ones that are crucial for the organization’s decisions around costs and logistics. In the design of the most recent women voter mobilization study I was involved in, the partner organization had to make decisions about whether to employ male or female mobilizers (or both), whether to focus on community level activities or one or one interactions, and we tried to design the study to help them make those decisions based on what works best.

A fruitful partnership requires that organizations are willing to open up their practices to academic scrutiny. In its ideal form, it opens up the possibility of learning on both ends – hopefully the results of my research can be beneficial for the partner organization to whatever extent possible.

RV: In your methodology, you focus on ‘participation’ quite heavily. How do you define it? And how does it serve as a measure of ‘progress’?

SK: I look at voter turnout as a measure of formal participation, but also take a more holistic view to think about various forms of informal participation. This includes taking what happens in the household seriously, including political discussions at the home, how political preferences are formed through discussion. I try to show that process of preference formation is gendered, and look beyond voter turnout numbers to describe the extent of the political ‘gender gap’. One of the findings in my work is that women are often unwilling to communicate political priorities that are different from those of their spouse. This brings into focus the potential gap between nominal rates of participation reflected in turnout numbers, and real meaningful participation that is autonomous and expressive of distinctive preferences.

RV: Can you elucidate for our readers what exactly ‘comparative politics’ means?

SK: Comparative politics is the study of domestic politics and political institutions and has historically involved comparing different countries to each other. Recently we have seen more “single-country” studies involving sub-national comparisons. It involves a variety of methodologies – quantitative and qualitative – but the focus is often empirical. With regards to the study of Pakistan, comparative politics scholars have gone beyond the securitized lens through which the country is often viewed in the United States, which I find very encouraging.

RV: Can you paint a picture of what your research process looks like?

SK: A lot of my work involves field-based research. The biggest rule in that sphere is that there is no great formula - it involves being flexible to other people’s needs and schedules. I heavily depend on exchanges and support from Pakistani researchers, organizations and contacts. When in Pakistan, I am affiliated with a research organization: the Institute for Development and Economic Alternatives (IDEAS). When in the US, I am in contact with my collaborators there quite regularly!

Another part of my process involves staying up to speed with research done by others. It’s very useful to read other disciplines and their approaches, and think about how they measure key concepts that I am interested in, like preferences. For example, I’ve found readings in psychology, economics and sociology to be very useful.

RV: Let’s zoom out a bit. Tell us more about your background – what brought to Yale, and to your particular research interests?

SK: I did my schooling in Pakistan, followed by my undergraduate and graduate studies in Columbia. Before my undergraduate years, however, I did an internship with a women’s rights organization in Pakistan called the Aurat Foundation. At the time Aurat Foundation was involved in mobilizing for the repeal of a gender-discriminatory set of laws (the Hudood Ordinances) in Pakistan. This gave me valuable exposure to activism and to women’s rights organizing long before I began researching it. I always knew I wanted to study politics in Pakistan, but was initially much more interested in international relations and foreign policy. With time, however, I grew disillusioned with the securitized lens implied in these approaches, and switched my focus to domestic politics. So it wasn’t until the third or fourth year of my PhD that the early experiences with women’s rights activism became relevant again, but it’s nice to come back full circle in some ways!

RV: You’re also teaching at Yale – tell us about that!

SK: I taught an undergraduate seminar titled Political Economy of Gender in South Asia, and a lecture this fall on the same topic. I’m experimenting with various teaching styles, but the focus on gender and politics will remain in my teaching. The lecture course, for example, will retain similar features of the seminar but respond to certain bits of feedback I have received. For example, I hope to incorporate more material about the intersection of caste and gender in the course, and start off by introducing students to intersectional approaches at the outset of the course. The seminar experience also allowed me to have deep conversations with students, and to use an interdisciplinary syllabus, that included non-academic readings. Students responded to this well! I’m currently developing a syllabus for a lecture course on electoral politics in the developing world, and want to use the past 2 elections in India and Pakistan to understand the broader political landscape.

RV: Finally, can you speak to your experience with the South Asian Studies Council? How has it benefitted you?

SK: A strong focus on area studies was largely missing from my graduate training, and I have enjoyed having it here at Yale from the SASC. For example, as a Pakistani researcher, it’s sometimes difficult to do research in India, and being exposed to scholars – both graduate students and faculty – who have had the chance to do in-depth fieldwork in India has been very rewarding and led me to ask new comparative questions. Being exposed to approaches from history, anthropology, economics, etc. has given me the chance to really learn from a variety of perspectives!

I’m very excited about using the SASC space to organize events that put scholars in conversation with each other. On November 14, I am helping organize a panel with two scholars who have recently written books about clientelism in India and Pakistan. In Spring 2020, I’ll be organizing a workshop on gender inequality in South Asia, in which I hope to bring together some of the scholars who feature on my course syllabus to present work from across disciplines. All in all, the experience with SASC has been very rewarding!