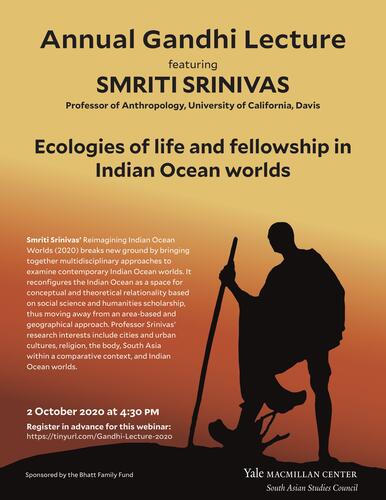 The annual Gandhi Lecture has been long been a highlight of the South Asian Studies Council’s offerings ever Fall Semester. This year, despite a revised format, was no different — the Council was pleased to welcome Smriti Srinivas, Professor of Anthropology at UC Davis, to deliver a talk on a recently released work that she edited — Reimagining Indian Ocean Worlds. Reimagining Indian Ocean Worlds has received praise for breaking new ground in Area Studies, bringing together multidisciplinary approaches to examine contemporary Indian Ocean worlds as a space for conceptual and theoretical relationality based on social science and humanities scholarship.

Dr. Srinivas was first introduced by SASC Chair Sunil Amrith, whose own work explores Oceans as conceptual categories that can allow us to transcend the prescribed limits of Area Studies. She then began her talk by frankly laying out what she saw as the stakes of her work — imagining a new future. “These are rather dark and challenging times, and this invitation gave me an opportunity to also think beyond the claims of religious and territorial nationalisms, and my piece today is somewhat speculative,” she said.

Dr. Srinivas began by speaking of two figures who shared a birthday on October 2 — Mahatma Gandhi, of course, but also Professor Patrick Geddes, a British sociologist and urban planner. Both, argued Dr. Srinivas, offered productive ways of starting to think about the relationship between politics, ethics, and aesthetics, both in the context of public space as well as in the body. “Can we think of garden landscapes as comprised of embodied practices and processes of space and time?” Srinivas asked. “My goal today is to see if we can unsettle our methods for studying space by treating it less as surface to travel on, a location to arrive at, a stage for cultural practices, and more of a site crossed by trajectories of embodiment, labor, memory and aspiration?”

For those of us confounded by the abstract theory, Srinivas proceeded to offer a number of illuminating examples, beginning with the tea gardens of Assam. “As tea and rice replaced forests, laborers were imported under various regimes to work in these gardens of empire, creating complex interplays between race, ethnicity, religion, commodity and places that had long-lasting implications,” she explained. The ways in which physical spaces were organized — and in turn organized societies — was also visible in rubber plantations in Malaya, where Tamils were brought to work — incidentally, a topic touched on in Sunil Amrith’s own work. Botanical gardens in Chennai, meanwhile, like those of the Theosophical Society in Adyar, also brought together botanical, religious and biographical trends from across South Asia and Europe, she argued.

Dr. Srinivas continued to offer case studies — from the Bodh Gaya to the story of Curuppumullage Jinarajadasa — to advance her argument. Gardens and other physical spaces, Dr. Srinivas argued, allow us to understand the world in paradigm-shifting ways that avoided easy categorizations — and that made space for what she termed a “human-non-human fellowship.” Dr. Srinivas concluded on an eloquent note, urging the audience to understand her lecture in broad terms. “The lives of plants and plant personalities are intertwined with human plants… Gardens as landscapes enmesh several communities, philosophical ideas, and religious refabulations across time and space. Working against enclosure, these gardens open us out to other imaginaries,” Dr. Srinivas said.

The lecture was followed by a lively Q&A moderated by Sunil Amrith, who also posed interesting questions to Dr. Srinivas about our relationship with the construct of “nature,” and the relationship between humans and non-humans, both plant and animal. Dr. Srinivas and Dr. Amrith led a fruitful discussion about the ways in which one could understand this relationship in ways that were not merely extractive. “We need to do the work of thinking through space more cogently,” stated Dr. Srinivas. “We need to bring some landscapes that have disappeared into the foreground.”

A link to a recording of the event can be found here or watched below.