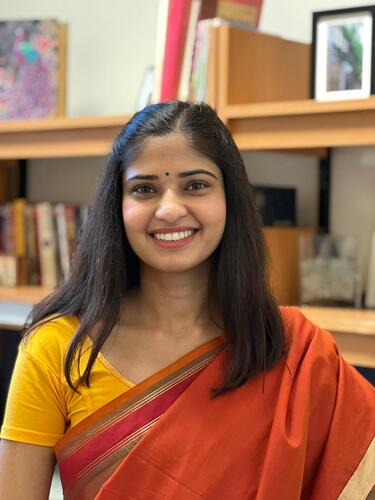 Can you tell me a little bit about yourself and your work before coming to Yale?

I always knew I wanted to be an educator, but growing up I had a range of interests and wasn’t sure what I wanted to teach. My passion for education led me to do a bachelor’s in education from CIE, the Central Institute of Education, at Delhi University. While there, I became interested in linguistics, and I ultimately went on to pursue my master’s and PhD in linguistics. As I was doing my master’s in linguistics I came across second-language acquisition, which I found fascinating. In 2014, when I’d already started my PhD, I came to University of Texas Austin as a Fulbright Foreign Language Teaching Assistant (FLTA). That’s when I realized that I really enjoyed language teaching and began contemplating pursuing it as a career after finishing my PhD. I ultimately joined the University of Texas as an assistant professor teaching Hindi in 2019.

Can you describe your pedagogy? How has it evolved since you started teaching?

I focus on using socio-cultural issues to build a broader understanding of the parent culture and the parent language. Language teaching plays a significant role in affirming and validating the ethnolinguistic identity of the language speakers. Therefore, I choose readings from different time periods, diverse social class, caste and different backgrounds. Hence, I use authentic materials including, but not limited to, classic literature, radio broadcasts, social media content and Bollywood movies for the students to appreciate cultural nuances. This gives students plenty of opportunity to play with and explore the language and its parent culture. In line with that, I emphasize creating an interactive and safe classroom space that is inclusive of different backgrounds.

Another thing that I do in class is use task-based language-learning approaches. In task-based learning, students are involved in solving a problem or negotiating the meaning of a concept that they might already know or in discussing a solution for a social issue that exists in society. In the process, they focus on using the language rather than on the form, which builds language proficiency.

Can you give an example of that kind of practice?

Let’s say we’re talking about gender inequality. In a previous class, I used an advertisement from FabIndia to illustrate some of the dimensions of the issue. In the ad, an uncle in the family asks one of the guys, “Why are you studying so much? At the end of the day you’re going to take care of the family and stay at home.” And that makes the guy feel very uncomfortable and very out of place. Then we ask the question, “Why do we ask women questions that we do not ask men?”

After that, the students were asked to make a video based on their experiences that depicts similar themes. One of the videos that students came up with is a guy who’s making Maggi noodles. He says, “I don’t know how to make anything else, Maggi’s the only thing I can make.” And a girl tells him, “You must learn how to cook or no girl is going to marry you otherwise,” putting men in the same situation that women are usually forced into.

In class, how do you approach the intersection between the outside world and the language?

The syllabus is organized thematically. In the fall we started with childhood. We went on to talk about social issues such as child labor, then we went on to adolescence, college, love lives, whether one should get married or not get married and when. Recently we were talking about whether one should adopt or not adopt, which led to the question of if you have some children of your own and some who are adopted, is it possible to treat all of them the same way or make everyone feel accepted in the family?

In the spring semester we’ll cover themes like gender inequality, religion, politics and how the two go hand in hand, especially in South Asia. We’ll talk about masculinity, because patriarchy affects not only women but also men and third genders or different sexualities. But the syllabus is crafted in an open-ended way so that we can always go where the students take the conversations. For example, the year before last, my students were very keen on talking about the divide between North India and South India. We read a story in Hindi on the topic, and then we watched and talked about the movie 2 States. Similarly, I had a class of students last year that was really interested in colorism, and I was happy to adjust the syllabus to create space for conversations about that.

Is there anything you’d like to add about your teaching?

In my classes, assessment is a learning tool. When students submit an assignment, regardless of whether they make one mistake or ten mistakes on the assignment, they all get a score of eight out of ten on the assignment. When they review their assignments and they repost the assignment on canvas, they get 10 out of 10. The point is to learn, not just to grade.

Second, I really try to make the topics that are chosen for class relatable and relevant to students’ lives. If students say, “This is something that we’re not interested in at all,” we’ll choose another theme to talk about. At the end of the day, my classes are about learning the language. It does not matter whether we are talking about women’s empowerment or comedy shows. The point is to learn the language. While I do want students to understand the language’s parent culture, I always center the fact that this is a language class.