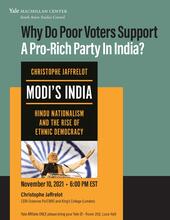 The tax policy of NDA II is revealing of its desire to spare some of the better off taxpayers whereas its welfare programs are not as redistribution-oriented as those of the UPA. Still, in 2019, a large number of poor voters have opted for the BJP. While this state of things can be explained by many factors (including the impact of social work and identity politics), in this paper I will focus on the role of caste to suggest that the BJP has attracted the jatis of SCs and OBCs which have not benefited very much from reservations and which happen to be the poorest.
This event is for Yale faculty & students only.