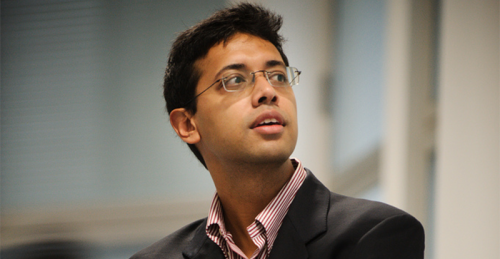 A program that protects families in rural Bangladesh from seasonal income insecurity — established in collaboration with Yale economist Mushfiq Mobarak — is among the world’s most cost-effective anti-poverty interventions, according to charity evaluator GiveWell.org.

The program, No Lean Season, is a new addition to the website’s annual list of top charities, which identifies effective charitable organizations based on evidence of their impact per donation.

No Lean Season offers no-interest $19 loans to poor, rural families in northern Bangladesh to pay for round-trip bus fare. This enables families to send a migrant to cities to find temporary work during the lean season — the period between the planting of rice crops in August and the January harvest — when jobs are scarce in the countryside and food insecurity is widespread.

Mobarak, a professor of economics with appointments in the Department of Economics and Yale School of Management, has worked with Evidence Action, an organization that supports evidence-based anti-poverty interventions, to implement and test the program. The collaborators conducted multiple large-scale, randomized, controlled trials over the last nine years showing the program increases incomes by an average of 19% during the lean season, translating to an additional meal per person per day for the families of the temporary migrants.

“The evidence-base for this program is very solid, and I am therefore confident that this announcement, and the donors’ generosity, will produce large benefits for poor families in rural Bangladesh,” said Mobarak, who is chair of the South Asian Studies Council at Yale’s MacMillan Center. “I feel especially content that this program will improve food security and nutrition among the poor in the country I where I was raised.”

In adding No Lean Season to its list of top charities, GiveWell.org cited the program’s transparency, its cost-effectiveness, the strong evidence base for its success, and its potential to expand through additional funding. Along with the announcement, GiveWell.org recommended that its philanthropic partner, Good Ventures, make an $11.9 million investment to scale-up the program in Bangladesh over the next three years.

No Lean Season also is supported by the Global Innovation Fund, and the start-up accelerator Y-Combinator.

To donate to the program, visit Evidence Action’s website.