Women, Communism and Feminism in India 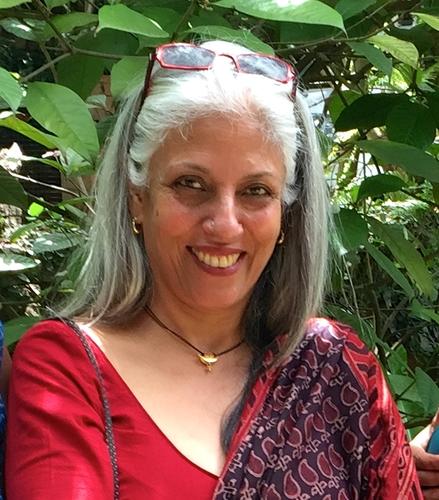 The South Asian Studies Council hosted another packed audience for the next installment of the Spring 2019 Colloquium Series as we welcomed Ania Loomba, Professor of English at the University of Pennsylvania, to Yale. Loomba spoke in conversation with Priyasha Mukhopadhyay, Assistant Professor at Yale’s English Department, and Sarah Khan, postgraduate associate and soon-to-be Assistant Professor at the Political Science department, on the topic of her recently released book, ‘Revolutionary Desires: Women, Communism and Feminism in India.’

In her book, Loomba explores the lives of communist, militant and radical nationalist women in India over multiple decades, beginning with the first years of the Communist movement to its fracture in the 1960s. As Loomba explained, her book aims to explore the ways in which women came to inhabit these newly created radical spaces, and how they strived to fight capitalism and colonialism, but also patriarchy, navigating what she termed a “rocky relationship between Marxism and feminism.” Loomba’s book has a number of revisionist threads that have the potential to alter the literary consensus. Importantly, and as Khan later picked up on in her comments, she aims to challenge the bifurcation of lives into the public and the private, instead showing that for many communist women, revolution involved exploring personal aspects that were otherwise relegated to the private sphere. This blurred divide meant that ‘revolutionary desires’ were neither solely private or public, but a combination of the two, a necessarily untidy story that reveals the protean lineages of communism and feminism. As Khan mentioned later, the ways in which revolutionary women challenged familial regulation of sexuality, absent parallel social movements, often meant that they did so at large personal cost.

At the same time, Loomba situated her book within an understanding of how militant communism was intertwined into a particular anti-colonial cultural ethos from its inception. But this has also meant that nationalist celebrations blunt the uniquely radical edge of Communist movements, depicting them as an appendage of the wider freedom struggle. In her book, Loomba hopes to depict the continuity of the revolutionary underground even after Independence and Partition. One example of how this was visible was the ways in which gender relations, sexuality and the imagination of alternate worlds were central to Communist ‘self-fashioning,’ even as revolutionary women found themselves dealing with the perseverance of patriarchal authority as they navigated new spaces in which they lived, loved and worked.

Loomba described with a well-deserved pride how what was an initially serendipitous undertaking evolved into a search for an array of little-known sources, eventually found through painstaking research that involved oral interviews, memoirs like that of Yashpal Sharma’s lover Prakashvati, Lahore se Lucknow tak, and party publications. This was something taken forward by both Mukhopadhyay, who spoke with admiration for the ‘methodological promiscuity’ of Loomba’s sources. Mukhopadhyay outlined what she saw as the central question the book faced: how to write history among sources that are not entirely reliable. The historian, she argued, would do just that – take sources as semi-reliable – but the literary historian instead takes it as literary history, a book about revolutionary desires transcending political and personal spaces. Continuing in this vein, Mukhopadhyay mused about how the topics could be located within a wider sphere of literary production, of readers, writers and readers who turn into writers. A critical mode of inquiry, in her view, was of language, and the relationship between the vernacular and the Anglophone, one where Loomba showed how revolutionary women were within an underground network that circulated both English and vernacular works, but within a constrained space by virtue of their underground nature.

A final theme touched on by Khan was one of violence as a recurring undercurrent; the violence performed by women as part of militant movements, the violence women hoped to escape in groups like the Hindustan Socialist Republican Association (HSRA), the paternalistic protection of women from violence, the violence against women within communes, but also the violence faced by these women from the common man or Congress worker, who often castigated them as ‘loose women.’ As Khan argued, Revolutionary Desires delved into the existing tension between these various sources and victims of violence to produce a nuanced and fascinating narrative.