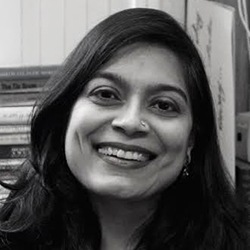 The South Asian Studies Council opened the month of November with a bang, enjoying the privilege of inviting over Sadia Abbas, the distinguished Pakistani novelist and Associate Professor of Literature at Rutgers University. Abbas’ scholarly focus is on post-colonial theory, and the culture and politics of modern Islam, and the history of 20th-century criticism. Her first scholarly publication released this year, titled “At Freedom’s Limit: Islam and the Post-Colonial Predicament.” Today, however, she presented one of her novels, “Empty Room.”

Abbas began by introducing her combined love for art and literature, both Urdu and English, and setting the scene with two extracts from the opening of her book, in which a woman, Tahira, soon realizes the shackles that is her marriage. This was followed by a wonderful reading of a letter from her book, highlighting how woven into this story of regret, pain and love, Abbas argues, are the complex dynamics of Pakistan’s early decades.

In a conversation moderated by Professor Priyasha Mukhopadhyay, Abbas elaborated on her motivations for the novel, the message it carries, and her own journey into writing novels.  When asked what made a literary critic ‘go to the other side’ and begin writing, Abbas said that it “kind of just happened.” As someone who wrote compulsively in moments of stress, the move to writing novels was not planned but more an impromptu product of artistic creativity. In some ways, Abbas doesn’t see writing and literary critique as disparate pursuits; both are, in essence, creative processes.

Abbas also delved into her inspirations: English and Urdu; Western and South Asian; and ranging from D.H. Lawrence to a tradition of feminism in South Asia. Although she sees taxonomic and epistemological problems with post-colonial theory, including the class issues with English, Abbas finds the rejection of English “numbingly boring.” Although she can engage in Urdu (and notably includes some Urdu in untranslated Nasta’liq script), she can’t displace herself by writing in a language she is not the most comfortable in simply to escape the fact of class realities with the use of English in South Asia. Abbas also delved into more abstract topics of color and silence- two motifs that permeate her novel. She spoke with a smile about how literary writing allowed her to let her personal pleasures – in this case, those of color – inform her writing as long as she can motivate it in the novel. At the same time, she argued that the predominance of silence in her book is not a fetishizing of the topic, but a reflection of changing gendered realities.

Even more fascinating was her location of the novel in the historical context it is based. To her, the 1970s was a time of possibility in Pakistan, one where anything could have happened. Her book tries to situate itself in this changing political sphere, not simply one brought about by the regime of Zia ul-Haq, but one that also has its origins in the nature of political transformations under Zulfiqar Ali Bhutto and the increasingly autocratic PPP rule. She decried the fact that in academia’s focus on the regime of Zia ul-Haq, the bricks laid in similar directions by his predecessor- particularly those in 1971 in Bangladesh and in 1973 vis-à-vis the new Constitution. Beyond politics, meanwhile, her book aims to capture the sociality of everyday life, and the social history of everyday material objects that are unique to South Asia, those of food and clothes, for example, rather than Western motifs of ribbons and daisies.

Abbas outlined how her book covers a critique and resistance of Pakistan, but also a celebration of her own city of Karachi, and the everyday sights of beauty in Pakistan. Critique, in her words, should not preclude an ability to appreciate, and the pessimism it inspires must in fact be balanced by a glimmer of hope. Without that, how is resistance of value?