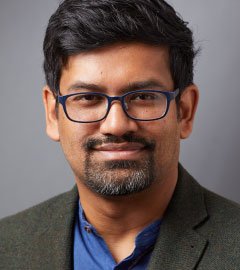 Rohit De, an associate professor of history, has been awarded an Andrew Carnegie Fellow by the Carnegie Corporation of New York. Fellows receive $200,000 in philanthropic support for high-caliber scholarly research in the humanities and social sciences that addresses important and enduring issues confronting our society. (Read Carnegie Release)

De is a legal historian who studies South Asia, postcolonialism, and the role of lawyers in politics. Among other topics, his research has explored the significance of political trials in Asia and Africa in the 1950s, and constitutions in South Asia. De is the author of A People’s Constitution: Law and Everyday Life in the Indian Republic, published in 2018.

Providing one of the most generous research stipends of its kind, the Andrew Carnegie Fellows Program was established in 2015. The program represents an overall investment of $38 million in some 200 recipients whose scholarly research spans such subjects as U.S. democracy, the environment, technological and cultural evolution, and international relations. The criteria prioritize the originality and potential impact of a proposal, as well as a scholar’s capacity to communicate the findings with a broad audience.