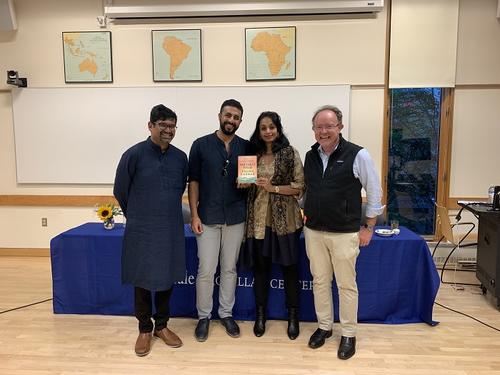 Karnad began the discussion by speaking of the journey that brought him to writing “Farthest Field,” now a multiple award-winning historical narrative. It began when he learnt a snippet of the story of his grandmother’s brother, Bobby, who fought in World War Two, but was lost in action. This startled him, and prompted him to think of why it never occurred to him that India had a story worth telling of World War Two. Karnad explained that he soon realized that this story would not be the discreet event it is often thought of, but one continuous with both the history of the colonial world order that preceded it and the post-colonial world that followed it.

At the same time, Karnad noted in the rising interest over the past decade in memorializing past wars, and the ways in which his book can be located in this historiography. Karnad noticed that this movement, sparked by the centenary of WW1, but also the new national military memorial for independent India’s martyrs – itself a war memorial for World War One and what followed – nevertheless left a conspicuous gap in memorializing what was India’s largest military engagement. This was not entirely accidental either – the fact that India’s experience of World War Two coincided with particularly active years in the freedom movement has made it a somewhat uncomfortable historical entity. After all, quipped Karnad, the army of free India was directly inherited from the army that kept India from being free. What Karnad termed ‘benign neglect’ also stemmed from other quarters, including academia’s emphasis on subaltern characters who exercised anti-colonial agency, as well as increasingly loud desires to lionize the army by nationalist forces that aim to hold it up as a politically valent icon.

The impact of World War Two on the army was profound. Forced to diversify the groups it recruited from and end the monopoly of Europeans in officer ranks, the army changed in substantial ways. Karnad’s characters – including, for example, a Parsi family from Kerala – were chosen deliberately to depict the non-typical characters that increasingly populated the army. For Karnad, the conception of a new middle class in the army, stuck in the middle of empire and nation in so many ways, was an appealing one, bringing a variety of identity-based complications. At the same time, other types of conservative barriers were also broken, epitomized, for example, by Indira Gandhi’s marriage with Feroze Gandhi, a Parsi man. What this left behind, posited Karnad, was a rather different type of army, one that had been transformed against the will of the likes of Churchill from an ethnically segregated and ill-distributed army to a more balanced peacetime army.

When probed on the ways in which he combined archival research with a novelistic rendering, Karnad admitted that he took certain novelties in what he termed “forensic non-fiction,” one where he stepped out of sanctioned rules of history writing while at the same time arguing his best case backed by sources. This allowed him, he explained, to create a sort of crowdsourced imaginative rendering of the characters, one that made them more than shells of the past. Historians, Karnad argues, have their own tools to mediate between the source and the reader; in his case, he “didn’t have them and didn’t use them.”

In the Q&A session that followed, Karnad was probed in a number of directions. Many questions returned to the question of memorialization, the final opportunities left to retrieve memory from those who lived through times like the Second World War, and the question of why these stories Karnad uncovered were not just lost, but erased from family lore.

This, after all, were what Karnad named the ‘farthest field’ – a point where stories are all but forgotten.