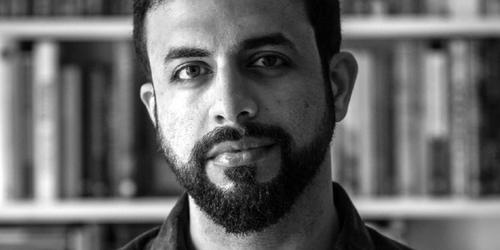 Combining forensic archival research with imaginative fire and unsettling national and colonial histories, Raghu Karnad creates an epic of un-forgetting that brings the experience of Indian soldiers of the Second World War into our common compass.

Born in Mumbai and raised in Bengaluru, India, Raghu Karnad is the author of Farthest Field: An Indian Story of the Second World War (2015). In this stylish and exactingly researched work, Karnad narrates the lost epic of India’s war through the lives of ﬁve young people—Karnad’s grandfather among them—who were drawn into it. Resurrecting diaries and documents, Karnad uses fragmented evidence and testimony to build an account that he calls “forensic nonﬁction,” as he untwines the fates of his subjects, from their school days in South India to their experiences of war, from the Arabian desert to the Burmese jungle. Cadenced and conﬁdent, luminous and expansive, Farthest Field represents an astonishing union of imagination and archival research in which the bitter ironies of family, loss, memory, and national identity are deeply explored and exceptionally told. Karnad has won several awards for his writing, including the Shaitya Akademi Yuva Puraskar (2016), the Lorenzo Natali Journalism Prize (2008), and a Press Institute of India National Award (2008). A graduate of Swarthmore College and St. Cross College, Oxford University, he is chief of bureau and editor-at-large for theWire.in, an independent news website that he helped to found in 2015.

It’s been a week and I’ve just about managed to accept that this is real, and not the result of a mistaken autocorrect prompt. I wrote my book without any certainty that it would even find a publisher outside of India. To have it recognized like this—and placed in the company of others that were my inspirations—feels less like an achievement than a fantastical dream.

Hear from Raghu Karnad at this upcoming roundtable: https://windhamcampbell.org/festival/events/the-farthest-field-a-roundtable-discussion