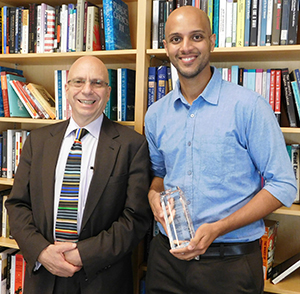 Two Yale faculty members have been awarded book prizes by the Whitney and Betty MacMillan Center for International and Area Studies.
Tariq Thachil, assistant professor of political science, was awarded the Gaddis Smith International Book Prize for best first book for Elite Parties, Poor Voters: How Social Services Win Votes in India. Stuart Schwartz, the George Burton Adams Professor of History, received the Gustav Ranis International Book Prize for best book for Sea of Storms:  A History of Hurricanes in the Greater Caribbean from Columbus to Katrina.
Established in 2004 to recognize the distinguished legacy of two former directors of the MacMillan Center, the prizes are awarded for books on international topics written by current members of the Yale faculty. Award recipients receive a research appointment at the MacMillan Center and a $10,000 research award over two years.
In Elite Parties, Poor Voters, Thachil asks: Why do poor people often vote against their material interests? This puzzle has been studied within wealthy Western democracies, yet the fact that the “poor voter paradox” also routinely occurs within poor countries has remained unexplored. This book studies how the paradox emerged in India, the world’s largest democracy. 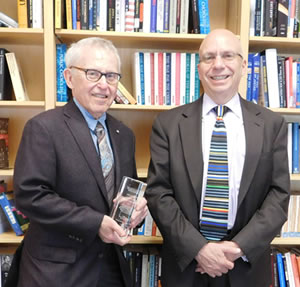 In Sea of Storms, Schwartz examines how Caribbean societies have responded to the dangers of hurricanes, and how these destructive storms have influenced the region’s history, from the rise of plantations, to slavery and its abolition, to migrations, racial conflict, and war.
The Whitney and Betty MacMillan Center for International and Area Studies at Yale is the University’s focal point for promoting teaching and research on all aspects of international affairs, societies, and cultures around the world. It draws its strength by tapping the interests and combining the intellectual resources of Yale’s Faculty of Arts and Sciences and of Yale’s 12 professional schools.