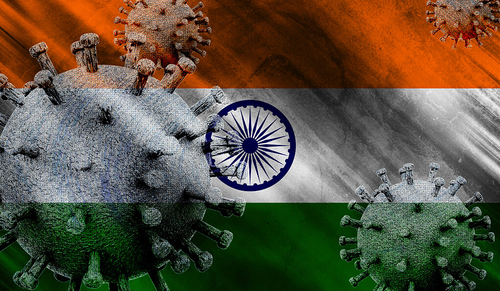 A Yale team’s research into the COVID-19 pandemic’s effects on India’s most vulnerable populations, including urban laborers who lost their jobs and returned to the countryside, is providing policymakers the data they need to address the crisis.

Led by two Yale economists — Rohini Pande, director of the Economic Growth Center (EGC), and Charity Troyer Moore, director for South Asia economics research at the MacMillan Center for International and Area Studies — the project informed public policy in real time and highlights the role Yale undergraduates are playing in studying the pandemic’s economic fallout in the United States and internationally.

Before the pandemic, Pande and Troyer Moore’s research team had ongoing projects in two Indian states in partnership with Inclusion Economics India, a research group based at Krea University. Once COVID-19 spread to India, their government counterparts in both states identified a need for data concerning the influx of migrant workers from India’s cities following a nationwide lockdown on March 24, 2020, including information on the effectiveness of efforts to support, track, and manage a network of migrant quarantine centers.

“The most economically vulnerable groups were going to be hit hardest, both on the health front but also from the economic effects of lockdown,” said Pande, the Henry J. Heinz II Professor of Economics. “Many migrants were returning and being located in quarantine centers, but policymakers had no sense for how well these facilities were functioning.”

At the time, the Yale administration was connecting students whose summer internships had been interrupted by the pandemic with researchers who were seeking to staff COVID-related projects. Pande spoke on a virtual panel about such research opportunities in social science, co-hosted by the Factuly of Arts and Sciences’ Division of Social Science, the Institution for Social and Policy Studies (ISPS), and the Tobin Center for Economic Policy.

“The response was very positive,” said Pande. “We went in anticipating interest from two or three students, but had over 50 students respond.” They hired nine Yale undergrads, mostly economics and computer science majors.

“It was exciting to get students involved in cutting-edge research with broader relevance to the world,” Troyer Moore said. “It was their chance to participate in the global COVID-19 response.”

From April to June, the team surveyed nearly 6,000 urban migrants who had returned to their rural homes about their circumstances and wellbeing: their food security, ability to find work, and access to government benefits. Since in-person interviews were not possible during the pandemic, surveys were conducted by phone.

India’s lockdown had been particularly challenging on urban migrants. Unable to work and lacking savings to make ends meet, many returned to their rural homes — often walking long distances because air and rail travel had been suspended. Once home, few had job prospects, and many faced discrimination, harassment, and even violence from their neighbors, who worried they might be carrying the virus. With uncertain economic futures, many migrant workers’ households were dependent on government relief to survive. 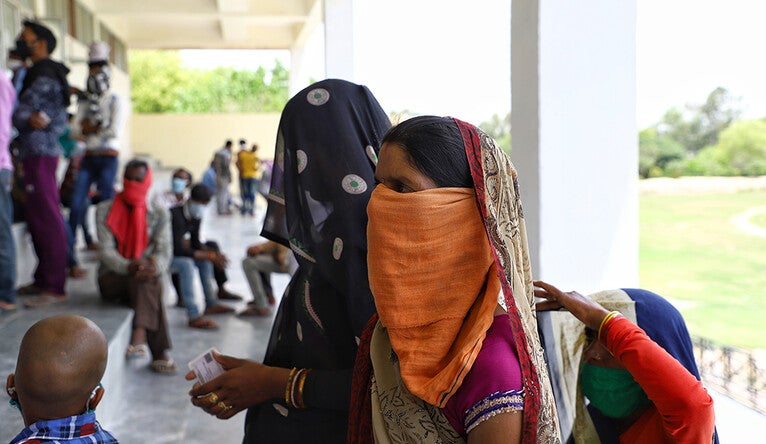 Migrant workers stand in line for a temperature check during a nationwide lockdown on May 15, 2020. (© stock.adobe.com)

The team’s research illustrated just how vulnerable migrants were, said Troyer Moore, who described the findings in a virtual panel discussion, “Migration in Crisis,” which was part of the South Asia Development Dialogues hosted by EGC and the South Asia Studies Council at Yale on November 13. Initially, many migrants found agricultural jobs during the lockdown, which coincided with a season of high agricultural work. But after this work ended, over 75% of migrants reported very significant financial difficulties and over 60% reported reducing consumption during the previous month. “They were neither tied to the city, nor to the rural areas,” Troyer Moore said.

A key goal of the summer project was to help local officials manage migrant quarantine centers. Due to staff and data shortages, the local government lacked an effective way to monitor the centers, identify issues being faced by migrants, or manage resources.

“Very often what policymakers struggle with even in the short term is any sense from the data of where the problem is the most significant,” said Pande. “On a daily basis, government officials need to understand what issues are happening where and how to respond to them.”

Combining government data with real-time survey responses, the team built a data dashboard tracking details like the number of migrants arriving at each center and the adequacy of facilities. With graphs and tables that could be filtered and sorted, the data dashboard provided policymakers with a rapid feedback loop and a critical crisis-response tool.

“It was exciting to be there as it happened,” said Michael Chang ’21, who is majoring in the interdepartmental Computing and the Arts program and plans to pursue a career in data science. “The dashboard helped ministers and officials get a much better idea about where they needed to send resources to help migrant workers. Our work helped inform policymakers about what sorts of actions they needed to take.”

The research agenda ahead

With nearly 10 million cases, India now has the world’s second-worst COVID-19 outbreak behind the United States. But as this research project underscores, the challenges of managing a pandemic are very different in a country like India, where extreme poverty is widespread, healthcare systems are weak, and high population density makes social distancing difficult.

One of the project’s most significant findings was that while social safety nets were critical to migrant wellbeing, state capacity often limited its reach. As the COVID-19 crisis evolves, the Yale team’s research is helping Indian officials weigh policy responses to strengthen safety nets and provide migrants long-term job opportunities.

Amid the many challenges, there may be opportunities, said Troyer Moore. Migrants often have useful skills from their urban work experience, which could be harnessed for rural development or small-business entrepreneurship. Research findings about the disproportionate hardships faced by women and lower-caste members could also provide impetus for larger-scale social change.

“COVID-19 is a major juncture,” said Troyer Moore. “The hard work will not wrap up when the pandemic ends. Getting started with the right type of data collection now is going to help push policy in the right direction.”

The India project fits into EGC and the MacMillan Center’s broader research agenda on how COVID-19 is affecting the global poor, particularly women and children, and how developing countries can design effective policies to support poor communities during and after COVID-19. The research on India’s migrant workers, for instance, could offer lessons to help governments prepare for the impacts of climate change, which is expected to create millions of migrants.

For Chang, his summer internship convinced him about the power and potential of data to create positive change in the world.

“Data science demystifies the unknown,” he said. “In its raw form, data is just waiting for someone to mold, filter, and channel it into something useful.”