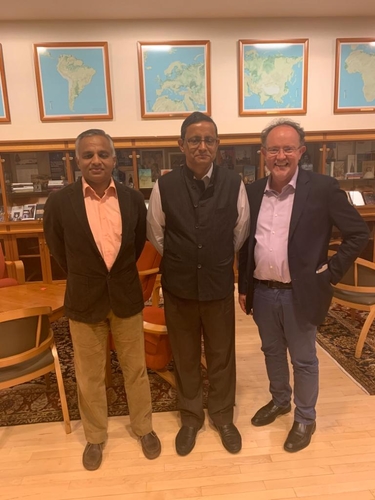 The South Asian Studies Council recently hosted Sanjay Mitra, a former Indian Administrative Service Officer and one of India’s top bureaucrats prior to his retirement this year. In a career that spanned over three decades, Mitra served the bureaucracy at both the state and national level, including positions as Chief Secretary of West Bengal, Union Transport and Highways Secretary, and Union Defence Secretary. Our South Asia Fellow Ram Vishwanathan met with Mr. Mitra for a short interview to learn more about his work, his experiences, and his message for the Yale Community.

Vishwanathan: After so long on the job, how has life changed after retirement?

Mitra: It hasn’t changed very much, in fact. I’m still busy with a number of things – teaching, reading, speaking at forums. I have a little more time for myself, which I am enjoying.

Vishwanathan: Speaking of change more broadly - you’ve worked with multiple governments across multiple decades at various levels during your career. India has changed considerably in these years. How do you track change at this level?

Mitra: A few things that have definitely changed considerably. Technology, for example, has engendered an entire paradigm shift. When I was your age, we had no computers, and even when they arrived they were rather rudimentary in design. But starting in the mid-90s, technological change has occurred at exponential rates. Phones have exploded onto the scene as well – India has hundreds of millions of mobile phones today. And social media is a new force that we’re only starting to come to terms with. It has begun to drive political agendas in a way I’ve still not got my head around. In India, we don’t study media to this degree of detail, but we need to start doing so soon.

Another change I’ve noticed as a bureaucrat has been a widening of the social base in decision making. When I began my career, there were perhaps only a few primary communities that formed the base of the bureaucracy. You knew everybody that needed to be known. With decades of reservation setting in, a number of communities are now represented in big numbers, and this has been a change for the good.

Finally, we’re also at a point now where after a long spell of minority governments, we’ve now returned to having elected a majority government. It’ll be interesting to see how this plays out in the near future, particularly with respect to institutions.

Vishwanathan: How have these changes translated on the ground?

Mitra: I think this can be seen very clearly on the state level. A number of states have implemented a number of social experiments that seem to have done very well. There have been a number of welfare programs in states like Karnataka, West Bengal and Andhra Pradesh, and Bihar and Rajasthan too. A number of these have been very innovative and very successful. I remember a program called Dhanalakshmi in Tamil Nadu that offered scholarships to girls and incentives for them to postpone marriage. We have a similar program, Dhanyashree, in West Bengal. We’ve achieved a lot of good work at the state level.

Vishwanathan: This in fact brings be to another question – as someone who has worked in both central and state bureaucracies, how are the dynamics between the two different?

Mitra: The dynamics are very different – states work very close to people, and your work as bureaucrat has very immediate and day-to-day outcomes that can be quite rewarding. At the center, you are distanced from the targets of your work by a few levels; the impact might be the same or even higher, but that sort of feel-good factor where you can put a face to your work does not exist.

Vishwanathan: As hinted to by your response earlier, it seems like state administrations have performed rather differently across the country. Many commentators have spoken, for example, of the North-South divide in India. What are your thoughts on this?

Mitra: There is a divide between North and South. It is quite evident when you look at the various social indicators. The South has done better in the spheres of literacy and gender, it has better education systems, wider healthcare coverage. In general, routine administration has been done much better in the South. I remember an example quite clearly – after the 2004 Tsunami that hit Nagapatnam, the Tamil Nadu administration had a comprehensive list with 48 hours of the number of lives lost, their addresses, next of kin, etc. We were able to disburse funds from the PM’s relief fund quite quickly. Elsewhere, administrations unfortunately were not able to collect this information even after a year.

Vishwanathan: Can you speak to working within the structures of a bureaucracy? Have you found it rewarding or constricting? And how have these changed over time, in particular during the liberalization of the 90s?

Mitra: I have tremendously enjoyed working in the bureaucracy. Above all, it is a job, and one I found extremely rewarding. And as a job, it paid well, which motivated me to work hard and sincerely. And as for changes, I would again return to the theme of technology. It has transformed entire paradigms, and there are so many benefits we have and will reap from it.

Vishwanathan: Do you feel there are also dangers associated with these technologies?

Mitra: It’s too early to talk about dangers. We should focus first on extracting the benefits we can!

Vishwanathan: There have been concerns in academic circles about the humanitarian crisis in Kashmir, the NRC process in Assam, among other trends that have emerged after 2014. Do you have any thoughts on these issues?

Mitra: I do not know enough about these topics, so it is not appropriate for me to comment. But I would state that it is important to distinguish between majority government and majoritarianism. Diversity is one of India’s most powerful assets.

Vishwanathan: What message do you have for students like me here at Yale?

Mitra: I would stress that India represents a great opportunity to do constructive research. It’s not a bad idea at all to study specific problems in India in depth and to suggest specific, detailed, well-researched solutions. Only one out of ten ideas might stick, but that idea could produce real change. I am thinking of someone like T.N Srinivasan, who spent so much of his life at Yale yet contributed so much to shaping policy in India. You don’t even need to be a South Asian to contribute, everybody should engage with South Asia. Look at someone like Esther Duflo, or the Rudolphs in Chicago. So yes, although I am not very good at making messages, my advice to you all would to be interested in and to engage with South Asia, and to gently nudge change in the region.

Vishwanathan: That sounds like a perfect way to conclude the interview. Thank you for your time!