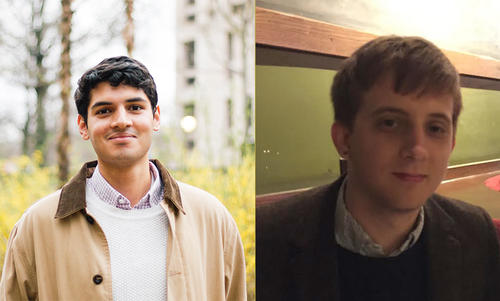 Arjun is a graduating Senior in Trumbull College from Overland Park, Kansas. He majored in Economics and South Asian Studies, and his South Asian Studies senior essay is entitled, “Shifting Social Structures: Interpretation and Redefinition of Caste in the Bhagavad Gita.” The essay explores the discussion and presentation of the caste system in the Gita and analyzes both the overlap and the divergence between this presentation of caste and the family-based caste system put forth by texts like the Manu Smriti. The essay asserts that Krishna advocates for a distinct character and action-determined caste system, which can perhaps be seen as more egalitarian than family-based caste ordering, but ultimately this system has failed to become a social reality. This fall Arjun will begin working at McKinsey and Company in Chicago as a management consultant.

Alexander Williams studies the legal history of Modern South Asia, focusing primarily on the legal profession, law and print culture, and India’s role in the 20th century international legal order. He has written on Indian History for TheWire.in, Scroll.in, Quartz India, Brink: A review of Books, and the Yale Daily News. He graduates from Yale with a B.A. in History and South Asian Studies and will be a 2019-20 Fox International Fellow at Jawaharlal Nehru University in New Delhi. He is grateful to have been funded by the South Asian Studies Council, the Robin W. Winks Fellowship, and the Lewis P. Curtis fellowship at Yale. His senior essay in History and South Asian Studies, Chains of Law: Prosecuting Collaboration and War Crimes in the Andaman and Nicobar Islands, 1945-48, analyzes cases concerning the Andaman and Nicobar Islands tried in Port Blair, Delhi, and Singapore in order to show that major international legal events after World War II like the Tokyo War Crimes Tribunal were built on top of a vast interconnected web of smaller-scale proceedings at the municipal and national level.