Colloquium Panelists discuss Intersectionality and the Politics of Categories 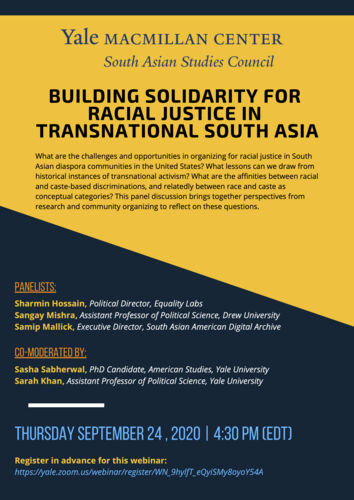 The South Asian Studies Council began our Fall 2020 Colloquium Series with arguably the most pressing topic of the current political moment: the need for a transnational reckoning with histories of race and caste.

The virtual panel was organized and co-moderated by two SASC affiliates: Professor Sarah Khan, Assistant Professor of Political Science and the DUS of the South Asian Studies Major, and Sasha Sabherwal, a PhD candidate in American Studies. The event was flagged off by SASC Chair Professor Sunil Amrith, who in a previous interview with the Council has spoken about his own desire to reimagine South Asia beyond traditional area studies boundaries.

This included Sharmin Hossain, the Political Director of Equality Labs, an Ambedkarite grassroots organizing network that has actively worked against caste- and race-based discrimination in the US. Hossain emphasized the interconnectedness of the two struggles, outlining how the work of her organization began. In 2016, attempts to erase mentions of caste from textbooks in California prompted Hossain and her colleagues to. Equality Labs’ work, Hossain explained, has included reports into the prevalence of caste-based discrimination — a topic that has recently come to the fore with news of the State of California’s decision to pursue a suit against Cisco for caste-based discriminatory practices. Hossain spoke to her organization’s work in the field, something she argued involves both organizing and research, but also imagining an alternative future.

“We’re going to have to build a vision that’s here for the long game. We have to rely on artists and media makers to culture shift. We have to listen,” said Hossain. “We have to really see our imaginations and our identities built within the projects that serve our communities, but we also have to imagine a progressive future where South Asians can celebrate our rich history, but also challenge internal hegemonies of caste, white supremacy, gender violence, patriarchy — all of it.”

Sangay Mishra, an Assistant Professor of Political Science at Drew University and the author of the book Desis Divided, was largely in agreement. Mishra delved into the various categories used by South Asian Americans in the US, and the politics of those choices — a topic that has come to the fore as forces on the both the right and left increasingly argue for religious or ethnic alternatives. In this context, Mishra argued for the need to distinguish between the term “South Asian American” as a racial category and as an identity. “The term South Asian as a geopolitical category and the term South Asian American in the context of immigrant communities have different communities. The latter is a deeply racialized category,” said Mishra.

Samip Mallick, who is the Executive Director of the South Asian American Digital Archive, spoke about the politics of these categories in the context of his work archiving histories. Like Mishra, he mentioned that the use of an umbrella term like South Asian American should not necessarily preclude an ability to take on other identities. “We started SAADA really recognizing that stories from the South Asian American community were not being systematically collected and preserved by other institutions. Not only were our community’s stories not being heard, but they were in danger of being lost entirely,” Mallick said.

Mallick shared the story of H.D. Mudgal, a South Asian immigrant in Harlem in the 1920s, who wrote of the interconnected nature of the anti-racism struggle and anti-colonial struggles around the world. Mallick argued that these stories are of critical importance at a moment when an increasing number of South Asian Americans in America see themselves identifying with the far-right both in the US and in places like India.

“It’s not just our own histories that are in danger, but our linkages and our interconnectedness with communities of our color. The South Asian community in the United States owes its very existence to the struggle against anti-black racism and the struggle for black liberation,” Mallick said, expressing his hope that these histories would remind the South Asian diaspora of their need to see justice in expanded, interconnected ways.

A link to a recording of the event can be accessed here.